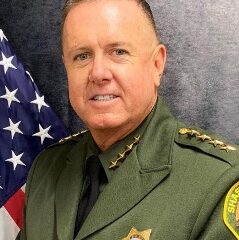 About this event
Join local business leaders as we meet with Sheriff Johnson and hear his vision for Shasta County.

Get the opportunity to ask your questions and learn what is in process to improve morale and rebuild trust in the department.

Light refreshments will be served. Registration is required for catering.

Andy has been a resident of Shasta County since 2008 when he moved his family from New Zealand.

Andy first met Mike Johnson during Leadership Redding in 2013/14. Andy is currently a member of the Sheriff’s citizen advisory committee. Andy has a coaching/consulting business and leads Heaven in Business, a faith based movement of business people based in Redding and connected across the USA.

Mike went to work for the Eureka Police Department 1996 as a patrol officer. He held several specialty positions throughout his law enforcement career, including Evidence Technician, Problem Oriented Policing Unit, Narcotics, K9 Handler, and SWAT. Mike has been awarded the Region VIII California Narcotics Officer of the Year award. He was a Drug Recognition Expert instructor, teaching course all across the state including at the CHP academy in Sacramento, CA. Mike also holds California POST Certificates for Basic, Intermediate, Advanced, Supervisory and Executive.

In July of 2007 Mike attended the FBI National Academy (FBINA). Shortly after graduating from the FBINA, Mike accepted a position as Chief of Police for the small prison-affiliated City of Ione (Amador County, CA). He worked as Chief of Police in Ione for five years. In 2012 Mike accepted employment as the Chief of Police for the City of Anderson. While employed with the City of Anderson, Mike earned a master’s degree in Criminal Justice. He was employed as the Chief of the Anderson Police Department for over 9 years.

Mike has been married to his wife Rosemary for 29 years. They have two sons, a 34-year-old hard working resident of San Diego, CA. and a 24-year-old United States Marine Corp veteran currently residing in Shasta County. Mike’s favorite hobbies include hunting, fishing, and dog training.

You do not have the rights to manage this Event.